Hogarth Pharmacy is a long established business providing excellent prescription services as well as first class information, advice and education on health matters to our customers.

The company was formed in 1952 by Jim Hogarth who provided pharmaceutical and photographic services from the premises at 514 Crow Road Jordanhill. Later in the 1950s he opened a second pharmacy at 342 Crow Road, Broomhill.

The premises at 308 Crow Road had been a pharmacy for over 50 years at that time and were owned by William McMaster. Sadly in the 1960s Mr McMaster died and Jim Hogarth bought the pharmacy from Mrs McMaster and closed the branch at 342 Crow Road.

Jim Hogarth died in 1977 and a few years later the directors took the decision to close the pharmacy at 514 Crow Road and concentrate the service from 308 Crow Road. Sam Gibson was superintendent pharmacist director until 1999 when he retired.

Robin Hogarth became managing director at that time and until his recent retirement at which point his niece Mhairi Speirs acquired the business and manages it to this day. Mhairi is an independent prescriber and has a diploma in travel medicine from the Royal College of Physicians and Surgeons. She set up a travel clinic at 308 Crow Road in 2010 and is able to advise on travel medicines, prescribe and administer vaccines to travellers. The premises are also a designated Yellow Fever Centre issuing the necessary certificate. 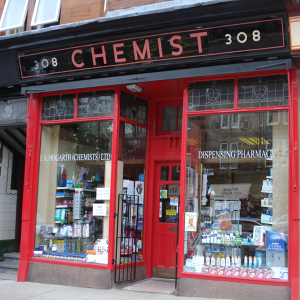 Hogarth Pharmacy skilled and dedicated staff are our greatest asset and are fully trained to assist and advise you on all your healthcare needs.

We value your trust in our Pharmacy as leading healthcare providers within the community. From senior Pharmacists to counter staff, we are all aware of just how important your faith in our people is when we are are entrusted with your private and sometimes sensitive medical information.

You can be assured that you can talk to any member of the Pharmacy team in total confidence and that they will act in your best interests with sensitivity and discretion at all times.

The relationship between our customers and staff is a core foundation upon which our business success has been built on.

Remember our healthcare professionals are here to help and provide confidential healthcare advice. So whatever your needs … we would love to see you in person or talk to you by phone to answer any question you may have

We process your personal data, which includes information from your prescriptions and any other pharmacy and health care services we provide to you (including medicines use reviews, flu vaccinations, stop smoking services etc.) for the purposes of:

Providing pharmacy services and care to you and, as appropriate, sharing your information with your GP and others in the wider NHS. We hold your information for as long as advised by the HSCB. You have a right to a copy of the information we hold about you, generally without charge. You may seek to correct any inaccurate information.

Sharing your information with the NHS Business Services Organisation, others in the wider NHS and sometimes local authorities, and only limited information to those external to the NHS who negotiate and check the accuracy of our payments. We process your personal data in the performance of a task in the public interest, for the provision of healthcare and treatment and the management of healthcare systems. A pharmacist is responsible for the confidentiality of your information.

Sharing only limited information with the HSCB Business Services Organisation and others in the wider HSCB and sometimes local authorities, as well as those external to the HSCB who ensure we maintain appropriate professional and service standards and that your declarations and ours are accurate

If you object to us holding your information: